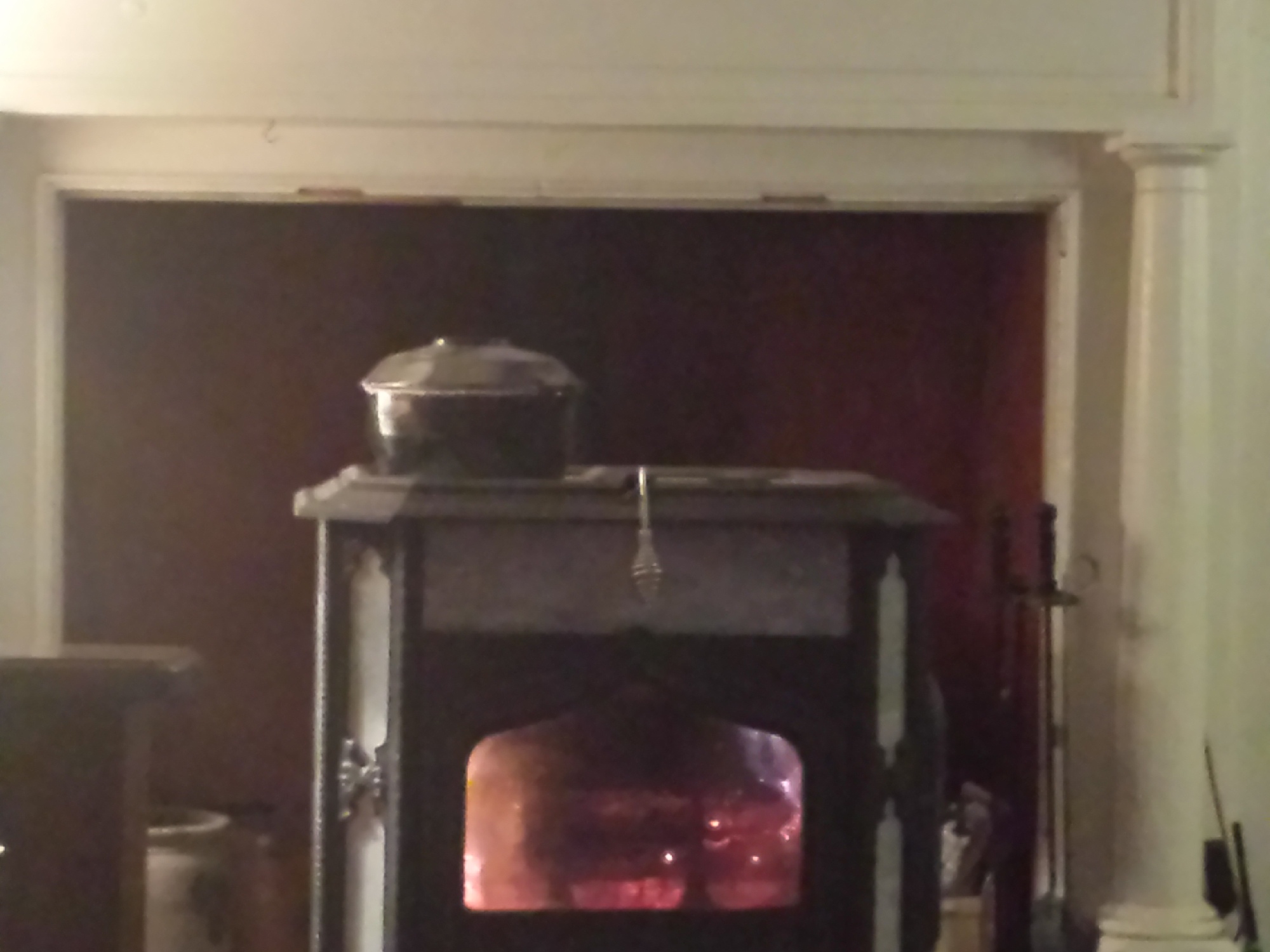 During the dark and chilly winter months, most find comfort and warmth by a crackling fire. The red-orange glow of the flames is mesmerizing.  One would think that in our home, which has two fireplaces, we would enjoy the ritual of putting on the logs and watching the flames dance. Surprisingly in the nine years that we have lived in our house, we have never once had a fire in either of them because the magic is lost on me.

Our farm is a  pocket of rural magic hidden in northern Baltimore County. Unless you know what you’re looking for, you could easily drive past our driveway and never know that you missed it. There is a mailbox at the end of the dirt path that looks as if it is left over from a home that no longer exists. But it’s there, tucked behind woods and fields and a driveway so bumpy that driving down it gives you a chiropractic adjustment.

Growing up, my house stayed much like the house was when my father, grandmother and great grandfather grew up. They did get electricity and indoor plumbing when my dad was nine. It was something for which we were made to feel grateful. “At least you have a toilet. When I was a boy, it was the pot or the outhouse.” The biggest gift you could give a person in the morning was sitting on the toilet before they did to pre-warm the seat. It’s an act of true love.

The one thing that never changed though was something that most people take for granted; indoor heat.

We relied on stoves for heat. For a time, there was a gigantic coal stove in the living room, but I’m guessing that word got out about black lung or my mother just got tired of cleaning up the coal ash and they got rid of it. That left one giant, black iron stove in our living room, sticking out of the fireplace just far enough to trip you when you walked by. It was too cold to get dressed upstairs, so we had to take turns standing behind the arm chairs in the living room to get dressed, which got awkward when we started getting taller. As much as I wanted to get dressed in my room, I’d remember that the temperature starts to drop dramatically around the fourth or fifth step and by the time I made it upstairs, I might as well have been outside. So, behind the chairs it was until Spring. I can get fully dressed from head to toe in 12 seconds flat.

You don’t know winter until you wake up with Jack Frost on the inside of your window. I had so many quilts on my bed that it was a test of my upper body strength to lift them off in the morning. I could see my breath in the air, but at least the rest of me was cozy. My sister is six years younger than I am and slept with me until I went away to college. I used to think it was just because she didn’t like to be alone, but now I think it was because she was just so cold. I tolerated the kicking and flailing because a warm body meant I didn’t have to put on the fifth and sixth quilt.  She struggled with wetting the bed for a long time; I’m convinced it was directly related to the fact that the toilet was all the way downstairs and she knew that by the time she got there her teeth would be chattering. Plus, peeing did make the bed warmer for at least a few minutes. Our poor brother was always left out of these bedwetting snuggle fests, which is probably why our parents let him get a dog: they were worried he wouldn’t be able to maintain his body temperature in the bed alone.

When most dads were relaxing on weekends, maybe watching football or piddling around in the garage, my dad was chopping wood. It’s hard to quantify how much wood my dad has chopped in his lifetime. How many trees did it take to keep us warm for a winter? Three, four, five? Multiply that by his lifetime and we are talking about a forest.

While most mothers were complaining about doing the dishes and vacuuming, my mom was cleaning the ashes out of the stove and off of the floor, putting in logs and tending the fire so that it didn’t go out. Once the fire went out, we were in for a cold spell until it got going again. That was one of the things we would get fussed at for the most; letting the fire out when we were sitting right next to it. It was a crime only second to flushing the toilet during a drought.

The floor in front of the stove was the coveted spot in the house. We fought over who got to lay there to watch TV (we did have television at least) and do homework. My sister often fell asleep there, all cozy and curled up like a cat.

Knowing all of this, I trekked to visit my parents with my kids this weekend because we have Monday off for President’s day, despite the fact that my hometown was expecting temperatures in the negatives. The back of the van looked like we were going camping; sleeping bags, multiple coats and an entire bag just for hats and gloves, on top of enough clothes to wardrobe 10 children, not just two. “It’s an adventure!” I told them. “It’s like camping…inside!”

And it was. Last night, instead of bundling the kids up in my childhood bedroom to see if natural selection really works, we laid sleeping bags out on the floor in the living room and slept with the woodstove a safe enough distance away that no one could accidentally roll into it. I slept on the sofa with one eye open, watching the fire, lest it should go out and we all turn instantly into the squirrel from Ice Age. It’s wonderfully warm at first; lulling you to sleep. The next stage is what I call “stripping down”, when the quilts come off, then the socks and finally the sweater, and I’m sleeping in a tank top and sweatpants, cursing the blasted heat. Phase three is less pleasant; when the fire dies down and I realized that I didn’t pay attention when I shucked off my socks and I have to find the sweater that I carelessly tossed on the floor before I start crying and the tears freeze to my cheeks. Frozen tears cause wrinkles. Finally at 4am, I was able to get the fire going steady and I dozed off until the kids woke me up around 7 with an inner-sleeping bag wrestling tournament that made the dog pee on the floor out of fear.

The best compliment came from my dad; “You did a great job keeping the stove burning.”

Yup, and I slept for about 14 minutes. I’m not used to it anymore. My tough farm girl shell has cracked, and I’ve become soft and suburban and used to the thermostat. I complain when it’s 65 degrees inside. The toughness that I had growing up has vanished from lack of use, and I have become complacent in my home comforts.

So when we moved into this house, the two fireplaces were not a huge selling point for me. They look nice and add a special something to a room, but I had no desire to light them up. Once you make a fire a mandatory part of staying warm, it doesn’t seem as fun. It takes the recreational aspect out of it and you’ve made it a job.  We could always have gas installed and go the route of flicking a switch, or we could just watch the fake fire that they have on Netflix with “life-like crackling sounds” that they close caption for you: [snap, crackle, pop] like Rice Krispies.

Tonight the temperature will dip once again, and I will be on watch to keep the fire burning. When I return home, I’ll crank up the thermostat and pretend that it’s the same kind of warmth. Ironically though, there’s a part of me that will miss it. It’s just not the same.